When we booked our trip to New Zealand, we weren’t particularly interested in going through the usual stop offs in Asia.

The idea of spending time in large cities like Singapore didn’t really appeal, so we asked about alternative routes.

Talking with Ben from STA Travel in Bristol back in January, we asked about the Pacific islands. The airlines STA worked with fly through Tahiti so after a quick google search, we decided it looked pretty incredible and chose to stop there on the way to NZ.

Neither of us are massive beach fans and the idea of slow paced holidays in typical paradisal locations hasn’t really grabbed us before – we’re more of a stunning scenery, getting out and exploring a place kind of tourist – but we thought we’d need a break after 23 hours of travel from Paris.

Tahiti was magnificent. It was everything we needed and has changed our view of the kind of holidays you can have in these locations.

Tahiti is quite honestly one of the most beautiful, relaxed, friendly places we have been.

There’s plenty to get out and see, so we endeavoured to see what we could in our few days there.

Arrived around 11pm on flight from Paris. Picked up from the airport by Marie-Hélène, our AirBnB host.

Shout out to US Immigration at LAX who have made it their life’s work to make every single person who passes through that airport feel more stress than humans have ever previously thought possible, while treating each visitor with suspicion and disdain.

3.30am. Woken by Global Cockerel Conference seminar discussing most inappropriate time to wake people up.

Marie prepared us a wonderful breakfast of mangoes, grapefruit, papaya, yoghurt, cheeses, bread and coffee. A continental start to the day with a tropical twist.

Headed to the beach at the bottom of Marie’s garden. Reasonable view. Spent most of the day snorkelling, looking at the dazzling local fish.

One of the absolute highlights of the year. Marie invited us on a whale watching trip with her friends. Another early start – everyone is up and off to work by 5am – for a quick trip over to the island of Moorea (Jurassic Park) where we would spend about four hours in the Pacific Ocean seeing dolphins, flying fish, sharks, stingrays and humpback whales.

Our tour found a mother and calf humpback. Tahiti is one of the few places where whale watchers can get in the water and observe the whales up close. With me being unable to swim, it was left to Steph to enjoy this spectacle with the rest of the group, something she describes as, “eerily majestic” and “truly amazing”. Seeing the whales from the boat felt much the same, quite moving even – although that may just have been the swell turning my stomach – so underwater and close up must have been wondrous.

After the whale watching Marie and her friend took us on a tour of Moorea, which to be quite honest we both thought was even more beautiful than Tahiti.

The day ended with a couple of beers on the beach at sunset.

It’s a day neither of us will forget in a hurry. 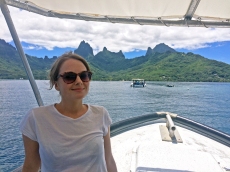 A quiet and solemn day during which I turned 30 and we rented a car for a tour around Tahiti – still incredibly beautiful – using the island’s one road.

Day ended with beers in the pool.

Our final day in Tahiti. We had booked a tour of the mountainous centre of the island with Teiva at Tahiti Discovery. Teiva is a native Tahitian whose family own the land we would but visiting. He lived and hunted there as a boy with his grandad.

Setting off at 8.15am in his Land Rover Defender, we turned off the road on the east coast of the island and climes up through the Papenoo Valley.

Teiva stopped every now and then to explain how his grandfather would use a silver fern to help guide their way home during a night hunt, the reflective underside of the leaf that gives the plant its name pointing their way through the forest when torchlight fell upon it. We also heard how his grandfather would use the “Tahitian telephone” to call him, hitting a chestnut tree with a rock, the sound of which echoed around the valley for miles. 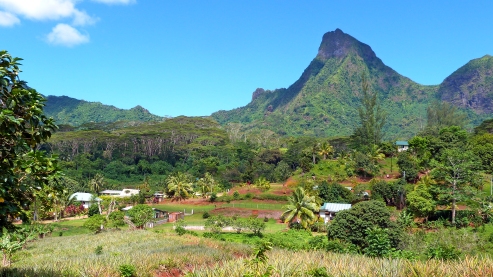 The scenery was unbelievable. Green peaks encircled by the 90km ring of the dormant volcano that helped to form Tahiti. It hasn’t erupted in about 1 million years, but we learnt of another destructive force that threatens Teivia’s land.

A group of investors are trying to buy the land from his family so they can build a 5-star resort there, paving the roads and cutting the top off a mountain to construct a restaurant with 360 degree views. The investors have visited some elderly members of Teiva’s family with suitcases full of Tahitian Francs in what sounds like a textbook Hollywood bad guy attempt to get control of the land. So far the family are standing firm, but it would be absolutely tragic for the island, for Teiva, his family and future travellers if they were to lose their piece of paradise.

We hope the developers are unsuccessful so this beautiful island is preserved for future travellers.

One thought on “Tahiti: welcome to paradise”